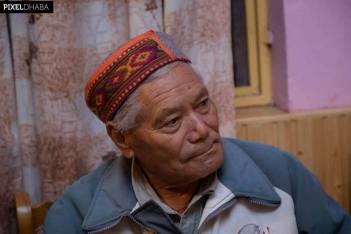 In the month of April 1936 Tshering Dorje was born into the family of Mayes in the tiny village of Guskuyar in Gahar Valley of Lahoul (Lahul). Dorje’s parents were doing mixed farming, agriculture and sheep rearing. That was the main occupation of Lahoul farmers. The population of the Gahar valley follows Tibetan Buddhism. Some of the family members of Dorje were practicing yoga in the past.

Dorje received education in a local school at Kyelang, and continued his studies in high school in Urdu. Thereafter, he went to Tibet to get teachings in Buddhism, following his family tradition to become a member of the family as Lama. He joined the ancient monastery of Tholing in Tibet, where he studied Tibetan language and practiced Tantara (Mahamudra). Then he went to Sa-ngag-cholimg (Central Tibet) for Kagyud school teachings. He left Tibet with other Indian Lamas due to political unrest because of the enforced Chinese Occupation of Tibet. He arrived back to lahoul (India) with incomplete education in Theology.

Luck favored him, so he received employment in the office of the Deputy Commissioner of Lahoul & Spiti as an interpreter due to his knowledge of Tibetan language. After several years of service as an interpreter he was promoted to the post of a Public Relations officer.

During my holidays, I often used to go see my uncle Thakur Mangal Chand in Manali. He was a highly qualified Amchi (Tibetan physician) and a practicing Zogchen master and a renowned scholar of English and Tibetan languages. Yuri (George) Roerich used to visit him frequently. During these visits, they discussed the dialects of Ladal  /Balti (western Tibetan language) for hours. Sometimes I was lucky enough to participate in those serious discussions.

During these talks, I gathered that Yuri had been doing a research in North-Eastern Tibetan language of Golog, where he compared that language to the westernmost languages of Tibet, e.g. Ladakhi / Balti. There are four dialects in this group: Chngpa, Ladahi, Purig and Balti – an archaic Tibetan language. Later I’d leart that Yuri (George) Roerich was a very famous linguist.